As the More is More Mom®, I’m all about……more seeing RED! Color inspires an amazing visual and emotional experience. For me, I am simply a red girl. Valentine’s Day is the perfect time to celebrate this fabulous scarlet hue…..

The toile pattern is an absolute classic; always beautiful in all of its incarnations. While pastoral and oriental themes are to die for, I love the nod to nature featuring birds and butterflies (another of my favorites!).

What a YUMMY chair! This would be fabulous tucked into the corner of a Living Room, a Foyer, or as host and hostess chairs in a Dining Room…..how glam! I would even sit on it while eating Green Eggs and Ham! 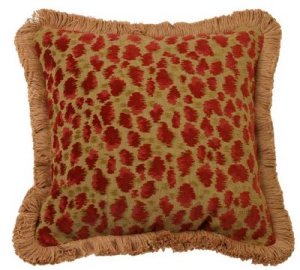 Throw pillows can add an inexpensive pop of personality! While they are at home on a sofa, chair, bed or bench, I love them in a more unexpected place, like a Dining Room chair; comfort, color and interest! 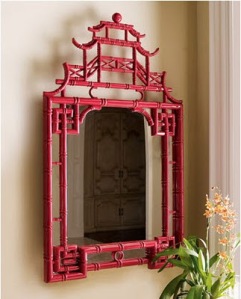 I am a sucker for Chinoiserie and anything red! Wouldn’t this be fabulous tucked in a Powder Room, Hallway or over a bureau?

The chandelier is a total statement piece. This would be a bold choice in a Dining Room, Bedroom or fantastic in a Bathroom.

What is more stately and elegant than Lalique crystal? While the iconic Lalique fish is delicate in stature, it packs a big punch! 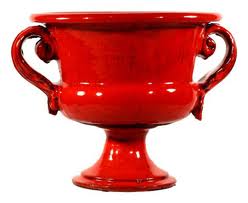 The classic urn is an interior style icon. It is at home inside and out, filled with plants, firewood, towels, magazines and anything else you can imagine

Monkeys and elephants are amongst my favorites. They are so playful! Here they are paired in a beautiful, whimsical lamp, which would be perfect bedside, on an end-table or in a Foyer.

A pair of love birds would be adorable nestled on a book shelf, mantel, in a centerpiece or outdoors. 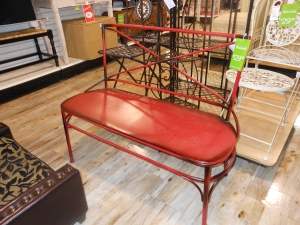 Speaking of the outdoors, while a garden bench is a welcome addition to……a garden, it’s also an adorable appointment in your home as well.

To schedule an Interior Design or Life Style consultation, or for any questions or comments, please email me at moreismoremom@aol.com

The Mysterious Case of the Broken Pagoda….

As the More is More Mom®, I’m all about……….more hidden, broken treasures! Last weekend, in a rare stolen moment, Chuck, Nick, Amanda, Wrigley and I were watching the Grammy’s (and how exactly did Justin Bieber not win New Artist of the Year? He’s cute as a button, and Amanda just informed me that his favorite color is purple…….the favorite color of the Patron Saint of Teen Idols; Donny Osmond. With such a winning combination, how could he lose?). Somehow, as these things tend to happen, our friendly conversation turned to the kids giving me grief about all the things I would never let them do when they were little, like watch Boy Meets World (too racy), say f-a-r-t (I insisted they sat “toot”) or go into the woods at the end of our street. They giggled as they informed me that whenever they had the chance they would watch Boy Meets World, say f-a-r-t and tempt fate by darting into the woods, if even for just a moment.

Suddenly, Amanda had a huge case of the giggles. She was practically hyperventilating as she asked Chuck, “Dad, didn’t you tell her?” Hmmm. “Tell me what?” I asked. “No, no, no,” they insisted they would go to their graves with their big secret. As they continued to laugh, they decided their big secret was too good to keep to themselves, so they spilled the beans.

For some reason, since Nick was in the 5th grade (which would be for the past 7 years), his life’s work has been to increase his vertical jump. Why, you may ask. He’s not a basketball player or a track star. The last time I checked, there was absolutely no need for jumping in golf or hockey. So what is his obsession with improving his vertical maneuvers? There are finger prints all over our house; on our woodwork, walls and ceilings. One time (Nick must have been in 6th grade) I was holding the ladder for Chuck as he made his way up the scuttle hole into our attic and I noticed pencil markings on my wall, marking off one foot increments. As a control freak, I happen to like things “just so” (which excludes writing on my walls). I could have killed him.

Apparently, a few weeks ago, while I was downtown preparing for my engagement at the Merchandise Mart, a minor accident happened in our home. Chuck was watching the news in our Family Room, Amanda was reading in our Living Room and Nick was running through our Foyer. Never one to miss an opportunity for an imaginary lay up on our light fixture, he jumped up into the air and as he came down, the carpet at our front door slipped out from under his feet. He flew into the air, landing on his back, but not before he managed to karate-chop collide with my treasured red pagoda étagère.

While Amanda tried to stifle her fit of laughter, Chuck went berserk when he heard the commotion and realized what Nick had done. Never mind the potential injury, my family is acutely aware of my obsession for order. This was a Brady Bunch moment if I’ve ever heard of one. You know, Mom always says, “Don’t play ball in the house.” There was no time for glue, the best they could do was spin the red pagoda étagère around and pray that I didn’t notice that the wood work was hanging on by a thread. I didn’t; though I would have been mighty surprised when I got to my dusting.

Truthfully, with three very busy kids in our home (which includes Wrigley), it’s a miracle more things haven’t been broken. In fact, I can count on one hand the number of casualties (a decorative plate, bumble bee sphere, a trompe l’oiel box and the window in our Den are the only items that come to mind. Not too bad for 18 years.). Fortunately, Chuck was able to glue my red pagoda back together, so it’s as good as new. I dare say that when my Nick is off to college in the fall, I am going to miss him jumping around, imaginary slam dunking my light fixtures and getting his finger prints all over my woodwork, walls and ceilings.