As the More is More Mom®, I’m all about……a more meaningful Thanksgiving! It’s official; I’m an adult. For the past 43 years I have been under the mistaken impression that Thanksgiving is about the turkey, the trimmings and the Christmas shopping at midnight, but, as it turns out, there’s more. Perhaps it’s because my Nick is a senior in High School, and I recognize that time is fleeting. When the kids were little, the days seemed to go on FOREVER! Now I see that the whole dynamic of our family is going to change in the next several months. So this year I wanted to be sure to savor every last moment. 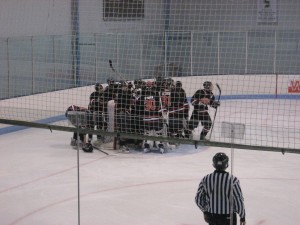 One of my favorite Thanksgiving traditions is our annual Turkey Tournament. What better way to spend Thanksgiving Day than at a hockey game at 8 a.m.? Both Chuck and I really wanted watch Nick play, but Amanda would have none of it (though who could blame her? This is a little sister that has had her fair share of hockey. We even spent her 7th birthday at a tournament in Canada. I kind of see her point). I just hated the idea of Amanda sleeping in and waking up to an empty house on Thanksgiving morning (though certainly better than on Christmas morning!), so she decided to take a vacation from us and have a sleepover at Nana’s.

While waking up at 5:45 a.m. may not seem like a great way to start a holiday, we wouldn’t have missed it for the world. Chuck and I dropped Nick at the rink at 7 and headed over to Starbucks for toasty warm beverages. My mom, brother and sister-in-law met us in time for the puck to drop at center ice, with Amanda as snug as a bug in a rug at home with Boppa.

Nick and I were a little bit disappointed that we weren’t available to run in the Turkey Trot this year, so we opted instead to take Wrigley for a run after we had a late breakfast after the game.  I loved it. Wrigley, Nick and me; stretching our legs and enjoying the fresh air together. Working up an appetite with a little exercise (or, as it was, even more exercise for Nick) is definitely the best way to prepare for the eating-fest that is Thanksgiving at my mom and George’s.

What a night! We nibbled, noshed, cocktailed and celebrated one another as we sat down to a delicious dinner. I especially didn’t mind the massive clean up afterward. That’s when some of my very favorite moments happen. There is teasing, gossiping, story telling and bonding; all the good stuff that the fellas miss out on while they watch even more football. The ladies all marveled at how well behaved Wrigley had been. Usually he is known to cruise the appetizer offerings, or graze at the leftover plates on the cocktail table, even though we keep him on a leash until after dinner. This year, however, he was a champ. He didn’t get into anything until after dessert when he jumped up and served himself some pumpkin pie. His Nana would forgive him anything and said that was okay because she had made plenty of pies. 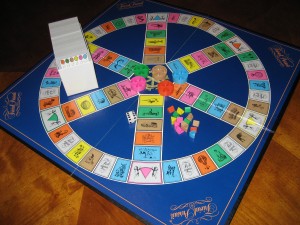 The very best part of the evening was, however, yet to come. My cousins Terri, David and Keith stopped by for dessert. My mom, being a total gamer, was only too excited to whip out the most recent edition of Trivial Pursuit. Clear the table, set up the board and roll the dice. Game on. It was the perfect end to the perfect night.

As the More is More Mom®, I must say that water in the basement certainly creates…..more opportunities.

My mom is amazing. She is everything a mother and grandmother should be; loving, encouraging, supportive, humorous, engaging, nurturing, involved, and devoted. My people are her only grandchildren and they swear that “NANA” stands for Nick-Amanda-Nick-Amanda. Even Wrigley makes out like a bandit. He never has to check in to a doggie motel, because he gets to be a city dog and vacation with his Nana and Boppa in Chicago. We’re lucky he’s willing to come home with us. Our cul-de-sac is sooooo boring; it’s nothing like Wisteria Lane.

This was the plan: Sunday night my mom would zip out to the ‘burbs in her Zoom Zoom Car (her Mazda 5, which she is crazy for!) and chauffer Amanda around town for a few days while I took Nick to his golf tourney in Wisconsin. Chuck of course would have to go to work (it’s a four letter word for a reason). Wrigley was super pumped to have time with his Nana. He likes her best because she holds his rawhide for him while he gnaws at it and she takes him for lengthy, leisurely walks. 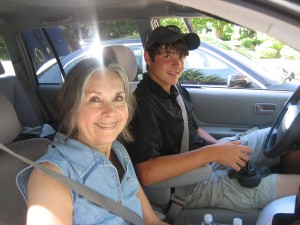 When the floodgates opened up to our basement, I called my mom and asked if she would mind taking Nick to his tournament instead. Mind? Absolutely not! She’d be delighted. Time with a busy teenager can be rather elusive and she’d been missing her Nicky Boy. Sometimes she will come for a quick sleepover to get her Nick fix, even if it’s just to look at him do his homework (though they usually stay up extra late and have a Will Ferrell marathon. Apparently napping is never frowned upon during 1st period.).

Now that I am a semi-professional golf spectator, I gave her the lowdown. Sunday night they would play a practice round and ride in the golf cart. Then, the following two days she could walk the 36 holes and admire Nick (in the nearly unbearable sun and heat). She was thrilled! We are a city people, accustomed to the concrete jungle, so three days on the links sounded like a vacation. Nana loved her time with Nick in the golf cart, cruising around from hole to hole. She is a woman that loves a good souvenir t-shirt and was hopeful the tournament would be selling one to commemorate her time with Nick.

Apparently, I’ve not given my mom enough credit; she is actually very good at locating the ball and keeping score….of everyone playing in the round. I can never find the ball and after each t-shot turn to Nick and ask, “Where did it go?” As we move on to the next hole I inquire, “How many strokes was that?” Not irritating at all.

They found a hotel that they both liked, while I complain about everything. If we don’t move to another hotel, at the very least, we change rooms. Each night they ate at one of Nick’s favorite establishments, Buffalo Wild Wings. One night they spent 4 ½ hours at the Cineplex enjoying Inception and Salt.

As it turned out, Nana brought Nick good luck. He shot a 78 the first day and a 74 the second. She was down with the lingo and would text us things like, “37 on the front 9 with a double bogey.” I barely know what that means!

The best part about our basement flooding (other than the overdue spring cleaning) was that Nick got to spend a few quality days with his Nana. What could be more meaningful than that?