As the More is More Mom®, I am all about……more sentimental moments. 15 years ago, my Nick embarked on his formal academic pursuits as a 3 year old Pre-School student. This morning after much prodding, and pleading for him to shake a leg, he was off to begin his first day of his senior year in High School. 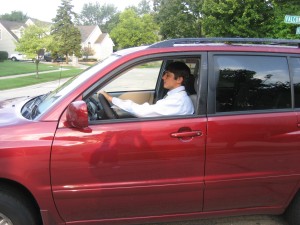 Last week was registration for the coming year at the Be All and End All Academy. We loaded up on books (snore, snore) and spirit-wear (rah-rah!). Before we went another step further, I insisted that we put Nick’s name, in ink, in each and every one of his nearly $500 worth of text books. When we went through this ordeal last year, Nick grabbed my ball point pen, snapped off the clip and jammed it into the “lock” of his locker. Politely, I inquired about what he was doing and he explained that if he jammed the lock, he would never have to go through the trouble of opening his locker all year. Yeah, I don’t think so. Get rid of that pen cap! This year on our way to his locker, Nick realized that he could not remember the combination. I mean really, how could he possibly be expected to have this information at his fingertips? He’s only had this locker for two years, and it’s not like he’s had to open it over the past ten weeks. After he was reacquainted with his combination, we set up shop.

I can’t believe that Nick is in his last year of High School, though all the talk of college applications and essays should be a pretty good reminder. It doesn’t seem like it was very long ago that he was settling into his cubby and getting an award for being able to zipper his own coat. Of course now he rarely bothers to wear a coat in the winter, but he is quite proficient at the zippering should the need arise. In fourth grade, he was extremely proud when he was the first boy in his class to earn an erasable pen because he had such nice penmanship. Funny, just this past year when I was at teacher conferences one of his teachers told me they had never seen a boy with such neat notes (which sadly does not extend to the state of his bedroom…..he’s a slobbone). However, my favorite teacher conferences were in 8th grade. I sat down for my 15 minutes and was joined by the new Spanish teacher. I remarked how nice it was that she came to meet all of the parents of her new students, but she informed me that she was really only sitting in on my conference. Wasn’t I special!?! Apparently, in true Nick fashion, he was raising his hand to ask questions every 30 seconds so she couldn’t get through an entire lesson. He’s a talker. He’s had similar issues with his Latin teacher over the past three years. When he raises his hand she clarifies whether or not his participation has anything to do with the current lesson. High School teachers tend to have those jokesters all figured out.

I got a little misty eyed as we wandered the halls. The Be All and End All Academy is an amazing school, with exceptional teachers, that has really lived up to its name. I’m truly moved when I see how much Nick has grown as a person, how he has been challenged academically, achieved intellectually and further developed spiritually, ethically and morally.

While this year will pass far too quickly for my liking, I can’t wait to see where Nick’s journey takes him. I only hope it’s not all that far from home. We only have two children (though Wrigley does make three. Thankfully he doesn’t have aspirations beyond home schooling) and can’t afford to loose one. More golf team, more Varsity hockey, more homework, more friends, more decisions and more moments to savor…..